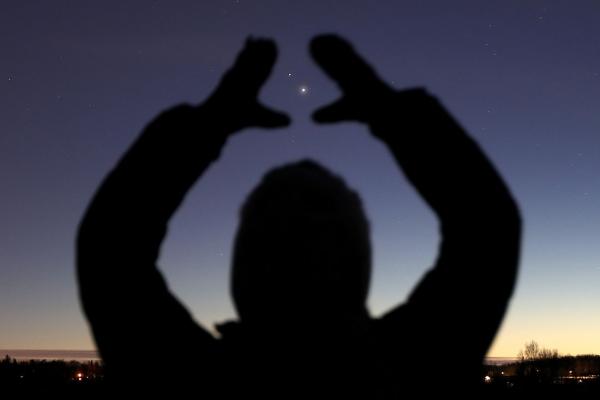 Jupiter and Saturn in Solstice Conjuntion

While we're all trying our best to keep our distance from one another during the current pandemic, Jupiter and Saturn are defiantly doing exactly the opposite. Since September they've been drawing closer and closer as they inch toward their Great Conjunction on Monday, December 21st. That night the gas giants will shine shoulder to shoulder just 0.1° apart (1/5th the apparent diameter of the full Moon) in their closest conjunction since July 1623.

Every 20 years, Jupiter, the closer and faster planet, laps slower Saturn and the two pair up briefly in a Great Conjunction. The last occurred on May 31, 2000, when they stood 1.2° apart low in the solar glare at dawn.

Conjunctions between planets occur because they all lie in approximately the same plane, like runners on concentric tracks. As we look across the plane of the solar system, defined by Earth's orbit, one or more can appear along the same line of sight, similar to seeing an airplane momentarily pass near the Moon.

If the line were exact, Jupiter would pass directly in front of Saturn and occult it. But this rarely happens because both Jupiter's and Saturn's orbits are tilted slightly with respect to Earth's, by 1.3° and 2.5° respectively. The last near-central occultation occurred in 6856 BC and the next will be in AD 7541. At every Great Conjunction the orbital deck is reshuffled, with the apparent separations between the planets varying from near zero during an occultation up to a degree or more.