Moons: A Family of Celestial Friends

Moons: A Family of Celestial Friends 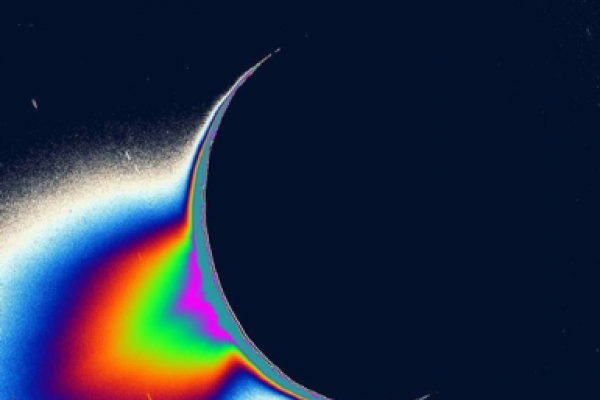 “The moon is a loyal companion.

It never leaves. It’s always there, watching, steadfast, knowing us in our light and dark moments, changing forever just as we do. Every day it’s a different version of itself. Sometimes weak and wan, sometimes strong and full of light.” – Tahereh Mafi

With July 20th, just a few days ago, marking the 50th anniversary of man’s first steps on the moon, now seems as good a time as any pay a little extra mind to our closest celestial neighbor and its extended family. Known as Selene by the ancient Greeks, Luna by the ancient Romans, and ancient Chang’e by the Chinese, our moon is as interesting as it is beautiful. It’s the biggest moon in our solar system relative to its planet (with a diameter equal to a fourth of the Earth’s), and it provides us with so much: from creating oceanic tides and keeping our rotational axis stable to inspiring works of art and the creation of ancient deities.
As interesting as our own moon is, I happen to think there are even more weird and fascinating moons out there. For example, the smallest of Jupiter’s Galilean moons, Europa, has an entire ocean of liquid water beneath its surface. One of Saturn’s smaller moons, Enceladus, has fountains that shoot ice particles out into space in beautiful plumes. Jupiter’s moon Ganymede is the largest in the solar system, and even has its own very thin oxygen atmosphere.
I don’t think even these moons, wonderful as they may be, are the most interesting moons of which we know. Second place in this ranking goes to a group of objects called moonlets, which are just delightfully surprising. Despite being an astronomy and astrophysics major myself, I was completely unaware of the idea of moonlets until just a few months ago. Moonlets are any natural satellites that are too small to simply be called moons, but just big enough to no longer be considered debris. They are so small that they weren’t directly observed until 1995, and they are still easiest to spot by looking for their effects. You know the parts of Saturn’s rings where it looks like a band somehow just got skipped and is no longer filled with dust like all the others? Those gaps hold examples of these tiny satellites, and they spend their time gathering up or pushing aside all the debris in their path as they orbit the gas giant.
Any moon that participates in this clearing-of-the-rings behavior, be it a moonlet or a full-fledged moon, falls into a class of satellites called shepherd moons. Shepherd moons take my first place in the most-interesting-moons competition. Sometimes working alone, and sometimes working in harmonic pairs, these strange little moons are responsible for all of those beautiful, dark, empty stripes in the rings of not just Saturn, but all of the gas and ice giants in our Solar System. The gravitational force of these shepherd moons pushes on the dust nearby and can have a variety of effects, from deforming the overall shape or consistency of the rings to creating beautiful braided-looking ripples in the debris. For a long time, we did not know why there were gaps in rings, and the fact that the answer is that there were secret tiny moons moving things around just make me happy to live in such a weird universe. 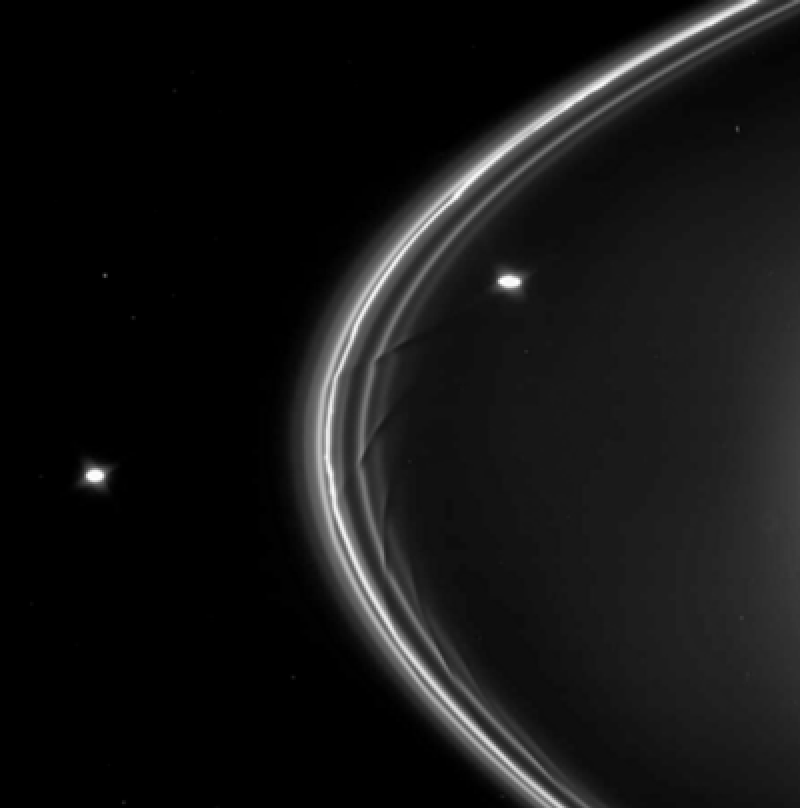 Image Credit: NASA/JPL/Space Science Institute. Frame of a movie sequence captured by the Cassini spacecraft of disturbances in the rings of Saturn caused by the shepherd moon Prometheus (the innermost moon)
Honorable mention in the most-interesting-moons contest has to go to moonmoons. While they are more scientifically known as submoons, many publications have latched onto the repetitive-sounding nickname, and it seems to have stuck. Moonmoons are currently hypothetical, as we have not observed one in our solar system and it is very hard to see something as small as a moon at great distances. As the name suggests, moonmoons are moons of moons, or to make it sound like less of a tongue-twister, small natural satellites orbiting moons that themselves orbit planets. In theory it would take very specific conditions for them to form, as most often satellites that might become moonmoons get sucked in by the greater gravity of the host planet and just become moons. I hope we keep an eye out for these weird little guys in the future, as they may just be out there, I would like very much to know for sure that they exist.
As our own Moon has been studied for a long time, and we have gone as far as to visit it ourselves, we tend to take moons as a whole for granted. They may not be the headliners in space media at the moment, but they are beautiful and strange, and more diverse than most people think. Moons are small, strange, and important, and I hope people staying interested in them may eventually lead to us making another “one giant leap” in our knowledge of these loyal little celestial friends.
As this was a very brief overview of some examples of moons, if this article left you with any questions, feel free to leave a comment and I will do what I can to respond to your query. I can’t promise to know everything, but I will do my best to either get you an answer or direct you to a resource where your question may be better answered. Thanks for reading and stay curious!
By Jackie Appel - Senior Undergraduate at OSU
Title Image Credit: NASA/JPL/Space Science Institute. A colorized image taken by the Cassini spacecraft of the spray from the Fountains of Enceladus
Share on Social Media